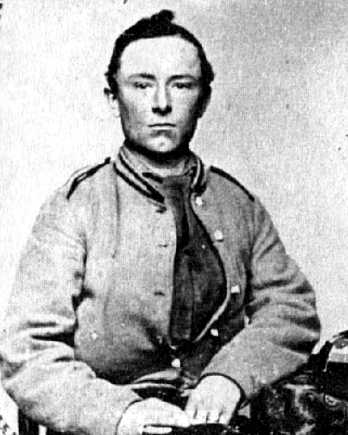 One of the most popular jackets portraying western Confederate troops is based on an original style possibly produced by the Confederate quartermaster depot in Columbus, Georgia. Judging from the surviving originals and a number of period images that appear to show this style, it must have seen widespread issue during the war.

The “Columbus Depot” jacket was first identified in published work by Les Jensen. The basic styling of this jacket is well known. The surviving originals were all made on a pattern of 6-piece bodies, with 1-piece rather full sleeves tapering to the cuffs. All are made of a wool-cotton jean cloth (a woolen weft on a cotton warp, apparently unbleached or brown in some of the jackets), woven to a 1/2 twill. A six button front was also common among these.

The jackets have collars and straight cuff trim about 2-1/2 inches wide of a medium or indigo blue kersey weave wool (not jean). The linings were made from a white or unbleached cotton tabby weave osnaburg. Stitching was done by hand, including buttonholes and top-stitching, and the jacket bodies have a line of top-stitching running around all outside edges, about 1/4-inch from the edge. Top-stitching on the collars and cuff trim varies.

Jensen identified two distinct styles of the basic pattern: a “Type I,” with interior pockets in the lining, and a “Type II,” with one external pocket, set into the body of the jacket, with a jean facing piece along the opening. Jensen felt that the “Type II” may have been produced later than the “Type I.”