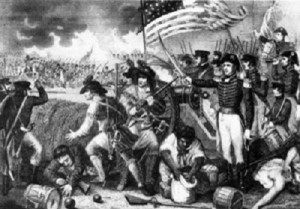 The Tennessee State Militia traces its origins to the American Revolution. During the Battle of King’s Mountain, approximately four hundred volunteers from the area known today as Tennessee crossed the mountains into North Carolina to fight against the British Army and Loyalist militias. They contributed significantly to the Patriot victory.

Tennessee militias served in battle again in the War of 1812 under Andrew Jackson. After fighting and winning the Battle of Horseshoe Bend (1814), they served with distinction in the Battle of New Orleans alongside other state militias, federal soldiers, local volunteers, slaves, and pirates against the British Army.

During the Mexican-American War, the nickname “The Volunteer State” became associated with Tennessee. When asked by President Polk to provide two infantry regiments and one cavalry regiment, Tennessee provided approximately ten times that number of volunteers.

During the American Civil War, the Confederacy took advantage of the many state-based militias to fight their war. Tennessee’s location on the border of Kentucky, which was a Union state, and the strategic hub of Memphis, Tennessee made the residents of Tennessee in constant need of forces to protect them from Union incursions. Tennessee volunteer militia units served in many battles of the Civil War, notably the Battle of Shiloh in which the 4th Tennessee Infantry served with distinction and lost nearly half of its members.

The Exploits of Patrick Griffin: “He Must Have Been Irish.”

November 22, 1861 – Letter of Colonel Commandant W. A. Holman [Robertson County] to Thomas R. Mason, relative to Militia call up and rendezvous at Nashville.

December 1, 1861 – Correspondence and militia notices in the Nashville Daily Gazette.

December 3, 1861 – Militia companies in Palmyra and the fight at Cousin Sally Dillard’s.

May 9, 1861 – An Act to amend the Militia Law of the State, requiring Captains to give notice, and for other purposes.

July 22, 1862 – On the Erstwhile Confederate Militia in Union Occupied Memphis.

February 26, 1864 – “General Orders No. 6.” Enforcement of the Enrolled Militia Program in Memphis.

May 18, 1864 – Punishment for illegal sale of passes and exemptions from service with the Memphis Enrolled Militia.