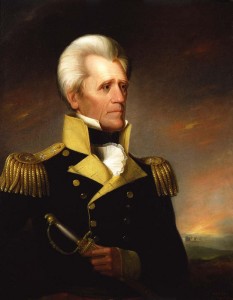 Jackson’s family emigrated to South Carolina from the north of Ireland in 1765. Only weeks before he was born in 1767, Jackson’s father died, leaving his mother alone to raise three young boys. Andrew grew up in his uncle’s household and received some formal education before quitting school at the age of thirteen to fight in the American Revolution. Those war years would leave lasting impressions on the young Jackson. Working as a courier, Jackson witnessed the war up close. His older brother Hugh was killed in combat, and both he and his remaining brother, Robert, were captured by the British. While imprisoned they contracted smallpox which eventually killed Robert. Andrew managed to survive, thanks to his mother’s nursing, but she soon succumbed to a fatal illness contracted while treating American prisoners of war at Charleston in 1781.

His immediate family gone, Jackson emerged from the war with a fierce sense of independence, a wild temper and a deep-seeded hatred of the British. Jackson survived on a small inheritance from his grandfather until the age of seventeen when he began to study law. After passing the bar, he moved to the western frontier town of Nashville where he married and began establishing political connections. He became the first congressman from the Tennessee Territory in 1796, and in 1802 he was finally elected as major general of the territorial militia, a position he had long coveted.

By the time of the 1812 conflict, Jackson had seen very little action as head of the militia. He firmly supported Madison’s declaration of war and volunteered immediately for service on the Canadian front. Months past and he received no response to his request. He put this down to political blacklisting stemming from a long-standing disagreement with former president Thomas Jefferson’s administration. Though he had little military experience to speak of, when the government scrambled to defend the Gulf Coast in late 1812, Jackson’s name was submitted as leader of a volunteer force by his friend the Governor. Jackson was an ardent expansionist who wanted to claim all of Spanish Florida for the Union, and to secure lands on both sides of the Mississippi River. In 1813, Jackson took advantage of disagreements in the Creek Nation to achieve these goals. With little British activity in the South, and the American population clamoring for someone to deal with the recent Native revolt targeting homesteaders, the action-hungry Jackson interceded on behalf of the government. After almost a year of disciplined command of his volunteer forces and ruthless elimination of any resistance, Jackson succeeded in crushing the Red Stick Creeks at Horseshoe Bend in spring of 1814. Soon after, he drew up a treaty which won the U.S. an additional 23 million acres of land from the Creek Nation, including the Native populations who had aided Jackson in his campaign against the Red Sticks. His victories against the Indians gave Jackson national recognition and the government rewarded him with a regular commission of major general in the US Army. Putting Jackson in charge of the Seventh Military District, the war administration hoped he could apply his initiative in defending the important, but militarily weak, southern territories. Jackson lost no time in preparing to meet the British who were already gathering on the Gulf Coast. He completed the reinforcement of Fort Bowyer at Mobile in West Florida only days before the British tried unsuccessfully to take it. Jackson subsequently went on the offensive driving the British out of Spanish Pensacola in early November of 1814. Jackson arrived in New Orleans in December and prepared to defend the city against a major British assault.

Wanting to have complete command over all operations, Jackson silenced the bickering city officials with his declaration of martial law. Despite his aggressive authoritarian manner, Jackson pooled the city’s diverse resources with his militia units and successfully repelled a larger British advance only a few miles below the New Orleans.

He was hailed as a hero throughout the country and was especially revered in the South. After the war, Jackson continued his conquest of southern territories, often without government sanction. He invaded Spanish Florida again in 1818, ostensibly to retrieve renegade Creeks who were wanted by the US government. The fierce resistance he met there by First Nations became known as the First Seminole War. Needless to say, Jackson furthered his reputation among these Natives and their allies as a ruthless thief and butcher. In the end, Jackson crushed all resistance and took possession of the Florida territory in the name of the United States. Only his unprecedented gains saved him from serious reprimand.

Many people credit Andrew Jackson as the man who first gave the American South and West power and prestige within the developing Union. He rode his successes of the 1812 War and the Seminole campaigns all the way to the White House when, in 1829, he became the seventh President of the United States. He held that office for eight years and was immensely popular. Andrew Jackson died in 1845.