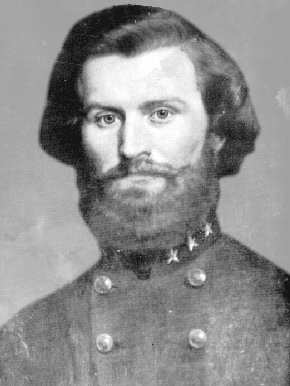 On May 12th, 1863, as the 10th Tennessee marched through Raymond and out to the battlefield, it was the tall, handsome MacGavock who led the brigade. He looked startlingly handsome on his horse even though the stirrup straps were too short for his gangly legs. His gray coat was highlighted with a scarlet lining and his sabre belt swung loosely at his side. Sergeant Patrick Griffin and the rest of the brigade followed on foot. Several hours after the impressive, crowd-winning, march through town, Colonel Randal MacGavock was one of the first killed on the battlefield. The tragic event changed the life of Patrick Griffin forever.

“I was standing about two paces in the rear of the line and Colonel MacGavock was standing about four paces in my rear,” Griffin recalled years later. “We had been under fire about twenty minutes when I heard a ball strike something behind me. I have a dim remembrance of calling to God. It was my colonel. He was about to fall. I caught him and eased him down with his head in the shadow of a little bush. I knew he was going and asked him if he had any message for his mother. His answer was: ‘Griffin, take care of me! Griffin, take care of me!’ I put my canteen to his lips, but he was not conscious. He was shot through the left breast, and did not live more than five minutes.”

Distraught over the death of his friend and commander, Griffin continued to fight until his unit began to withdraw from the field. “While we were stopped, I met Lt. Colonel William Grace and asked him if he knew that Colonel MacGavock had been killed when the battle first began?” Colonel Grace was surprised but gave Griffin orders to get off the battlefield the best way he could. “I explained to Colonel Grace that I wanted to go back after the Colonel’s body, but he said that it was out of the question. I insisted that I had given my promise to the Colonel to take care of him, and that I was gong to do it to the best of my ability, whatever happened.” McGavock was determined to find his commander’s body and give him a proper burial.

Backtracking onto the battlefield, Griffin searched until he found MacGavock’s body and, with the help of other members of the brigade, began to carry the body into town. Progress was slow because of the heat and the carnage on the battlefield.

After lugging the body for several hours, Griffin was surprised when a Yankee officer with a thick Irish brogue addressed him saying, “Who is this officer you are holding in your arms?” A surprised Griffin answered the bluecoat saying, “My own colonel. His name is MacGavock – an Irish name.” Griffin then inquired as to the officer’s name and found that he was Captain McGuire. The encounter revealed the oddest of circumstances. McGuire was from the same county in Ireland as the parents of Patrick Griffin and Randal MacGavock. Sympathetic to the cause, Captain McGuire ordered his men to place MacGavock’s body in one of the Union army wagons for transport into town. Of Captain McGuire, Griffin later commented, “I want to say right here that I am convinced that if ever there was a good Yankee he must have been Irish!”

After Griffin was taken prisoner and placed in a Raymond jail for the night, McGuire promised to try to procure a parole for his Irish counterpart. “The Colonel’s body was placed on the porch at the hotel and remained there till the next morning,” Griffin reminisced. “The next morning, Captain McGuire came with a two days’ parole for me. I got a carpenter and had him to make a box coffin, for which I paid him $20.00. My fellow prisoners assisted me in every way they possibly could. I hired a wagon in town and got Capt. McGuire’s permission to have all the Confederate prisoners follow the Colonel’s body to the grave. We had quite an imposing procession, with, of course, Yankee guards along. I had the grave marked and called the attention of several of the citizens of Raymond to its location, so that his people would have no trouble finding him when they came to bear him home to Tennessee.”

Of the death of his commander and friend, Patrick Griffin would later remark, “Although I was only a boy then, the memory of the miserable loneliness of that night has never been quite blotted out in the years that have intervened. Although I was literally worn out, I did not sleep a wink the night before I buried my colonel. No man has ever come across life’s pathway to fill MacGavock’s place in my heart.”