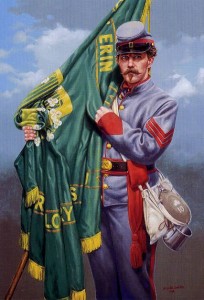 Known as the “Bloody Tinth”, it was one of only two Irish Catholic regiments in the Confederate Army, although their elected officers were mostly Ulster-Scots Protestants.

They built Forts Henry and Donelson and then were captured and held in Camp Douglas Prison. Reconstituted, the 10th were deployed as sharpshooters through the tough campaigns at Chickamauga, Chattanooga and Atlanta.

The Regimental flag originally belonged to Company ‘D’ of the Tennessee State Militia. It was outlined in Kelly Green on a light green background. A gold harp, maroon trim with white lettering; above the harp, “Sons of Erin”; below the harp “Where glory await you”.

Hello to all you fine gentlemen, and welcome to the 10th Tennessee Volunteer Infantry Regiment! I felt that an introduction would be helpful, as we are unlike many of the other regiments currently taking part in the North and South mod.

The 10th Tennesse is actually a grouping of two separate regiments from Napoleonic Wars: the Marins de la Garde Impériale and the 4th Regiment of Foot, the King’s Own. Both of us have been involved with each other for more than a year, and in that way, we have both set our interests on the 10th Tennessee, which was our identity in the ancient “A House Divided” mod.

We are a joint command, split between Captain Smithy of the Marins de la Garde and Captain Mitchell of the 4th Regiment. We are currently undergoing a reform of the regiment and will repost the roster once that is finished.

I can easily say for both regiments – THE regiment that we are very exited for the North and South mod. To all who look upon this thread, I hope to see you on the battlefield, as a friend or a foe! Faugh A Ballagh! 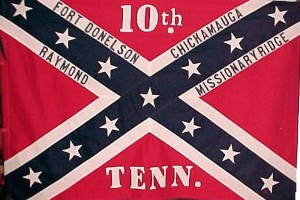 The 10th Tennessee Infantry was organized at Fort Henry, on the Tennessee River, in May of 1861, just a few weeks after the first shot was fired at Fort Sumpter. In July 1861, the 10th Tennessee was reported with 720 men armed with flintlock muskets. When accepted into the service of the Confederate States of America, the regiment was reorganized and the Giles County company was designated Company I. This regiment remained at Fort Henry from the time of its organization in May,1861,perfecting itself in drill and discipline, until the bombardment by Federal forces on February 6,1862.

The 10th was under fire at Mechanicsville, and took part in the desperate assault of Longstreet’s division on the enemy’s position at Gaines’ Mill, and emerged victoriously from the bloody combat with the loss of half of the 350 men it had engaged. Three days later, the regiment was in the line of assault at Frazier’s Farm, where it met Meagher’s 69th NY Irish brigade, and of 180 effective men, only 90 were at regimental muster the next morning. Its ranks soon began to fill up, and the 10th marched with the army towards the Potomac.

At the second battle of Manassas it was under a destructive fire, and lost about 60 men, but was held in reserve. The regiment took part in the capture of Harper’s Ferry, then crossed the river and fought obstinately at Sharpsburg, where it lost 67 killed and wounded. It wintered at Rappahannock, and the 10th once again faced the 69th NY at Fredricksburg. At Salem Church, Wilcox’s brigade of Alabamians, of which it was part, bore the brunt of the federal assault, and drove them back in confusion, capturing 1500 prisoners; the 10th losing 58 men killed and wounded. 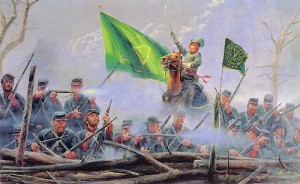 It was in the exultant army that Lee led into Maryland the second time, and its colors were flouted in the face of death at Gettysburg; where of 420 engaged, 260 were left on the bloody field. With the army it re-crossed the Potomac, and wintered in the vicinity of Orange C.H. The regiment was again hotly engaged at the Wilderness, losing heavily, and at Spottsylvania suffered considerably. It was under fire nearly every day as the federal army pressed up to Richmond, and its loss was severe at the second Cold Harbor.

At Petersburg the 10th again suffered largely. It fought the cavalry raid on the Weldon Railroad, and participated in the capture of the “Crater.” At Deep Bottom the regiment participated with some loss, and lost heavily in the attempt to dislodge the enemy from their position on the Weldon Railroad. The regiment assisted at the repulse of the foe on the plank road below Petersburg, and fought cheerfully on the retreat up the James. At Appomattox the remnant indignantly denied the first rumors of the contemplated surrender, many wept like children at the announcement, and the survivors tore their battle-rent banner into shreds to retain as a memento to their fallen comrades. 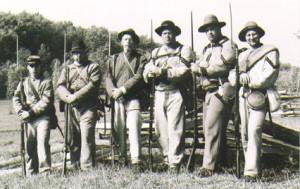 Of the field officers, Colonel Heiman died in November 1862. Colonel MacGavock was killed at Raymond, Mississippi on May 12, 1863; Colonel Grace died of wounds on August 31, 1864; Lieutenant Colonel Thompson was retired to the Invalid Corps on September 17, 1864, and Major Brandon resigned on October 12, 1861.

The regiment was reported at Fort Henry in July, 1861, with 720 men, armed with flintlock muskets. Also present at Fort Henry in October, 1861 were Captain Jesse Taylor’s Company of Artillery, and Captains Hambrick’s and Bacot’s companies of Colonel Nathan B. Forrest’s Battalion of Cavalry. The regiment remained at Fort Henry until the evacuation of that point on February 6, 1862, but Lieutenant Colonel MacGavock was detached from the regiment and sent to Fort Donelson on October 8, 1861.

An inspection report November 1, 1861 spoke of the 10th as being in fine condition, saying it was the only regiment at Fort Henry ready for service. In February, 1862, Colonel Heiman was in command of a brigade at Fort Henry, composed of the 27th Alabama, l0th and 48th (Voorhies’) Tennessee Infantry Regiments, Culbertson’s Battery, and Gantt’s Cavalry Battalion.

On February 6, 1862, Fort Henry fell, but all but about 80 men were evacuated prior to the surrender and sent to Fort Donelson, with Colonel Heiman to assume command until the arrival of Brigadier General Gideon J. Pillow. At Fort Donelson, Heiman’s Brigade was in Brigadier General Bushrod R. Johnson’s Division, comprising the left wing of the Confederate defenses. The brigade consisted of the l0th, 42nd, 48th (Voorhies’) and 53rd Tennessee Infantry Regiments, Maney’s Tennessee Battery, and the 27th Alabama Infantry Regiment, totaling about 1600 men. Fort Donelson was surrendered February 16, 1862, and the enlisted men in the 10th were sent to Camp Douglas, Illinois.

While there, Colonel James Mulligan, of the Federal Irish Brigade, wrote General Halleck that there were a good many Irishmen in the 10th Tennessee Infantry who wished to take the oath of allegiance and enlist in his forces. Permission to enroll prisoners was denied at this time. A little later, March 19, at Camp Butler, Springfield, Illinois there was published a list of Confederate prisoners who desired to join the Federal forces, but there were only five men from the 10th, 50 Mulligan seems to have exaggerated.

The regiment was paroled at Vicksburg in September, 1862, reorganized October 2, 1862, and declared exchanged November 10, 1862. At the reorganization the same field officers were re-elected, but Colonel Heiman’s health had been impaired by imprisonment, and he died in November, 1862. Lieutenant Colonel MacGavock succeeded him as colonel, William Grace became lieutenant colonel, and Sam Thompson major.

On May 2, 1863 the brigade was ordered back to Mississippi, and fought at Jackson, Mississippi May 7, and at Raymond May 12. At Raymond the regiment suffered 52 casualties, including Colonel MacGavock, who was killed. Lieutenant Colonel Grace was promoted to colonel, Major Thompson to lieutenant colonel, and Captain John G. O’Neill became major.

On May 26, 1863, Gregg’s Brigade was shown as in Major General W. H. T. Walker’s Division with 2730 present for duty. Composition of the brigade was the 14th Mississippi, 3rd, l0th, 30th, 41st, and 50th Tennessee Regiments, 1st Tennessee Infantry Battalion, 7th Texas Infantry, and Bledsoe’s Battery. The brigade remained in Mississippi until September, 1863, when it was ordered to join General Bragg’s Army of Tennessee, which it reached on September 17, just in time to take part in the Battle of Chickamauga, September 19-20. At Chickamauga, the brigade was in Brigadier General Bushrod R. Johnson’s Division. Gregg was wounded, and Colonel Cyrus A. Sugg, of the 50th Tennessee; took command of the brigade. The 10th reported 190 men engaged. The Brigade reported a total of 1415 engaged, with 652 casualties. It captured a Federal battery of nine guns.

On December 14, 1863 the brigade consisted of the 37th Georgia Regiment, 4th Georgia Battalion Sharpshooters, l0th, l5th/ 37th, 20th, 30th Tennessee Infantry Regiments and 1st Tennessee Infantry Battalion. The l0th, commanded by Major John O’Neill, reported only 69 effectives. By February 20, 1864 General Bate had assumed command of the division, and the brigade was known as Tyler’s Brigade, with the same units, except that the 1st Tennessee Battalion was gone. On July 10, 1864, the 2nd (Robison’s) Tennessee Infantry was added to the brigade. No further changes in the composition of the brigade were shown until after the Battle of Franklin, November 30, 1864. During this time, the brigade had fought at Missionary Ridge, throughout the retreat to Atlanta, and the march back into Tennessee. At the Battle of Jonesboro, August 31, 1864, Colonel Grace was mortally wounded, and John G. O’Neill became colonel of the 10th in his stead. Bate’s Division had 319 casualties at Franklin.

On December 10, 1864, the 2nd/l0th/20th/ 37th Tennessee Infantry Regiments, along with the 37th Georgia Regiment and the 4th Georgia Battahon Sharpshooters formed a brigade commanded by Lieutenant Colonel William M. Shy, in General Bate’s Division. Immediately after the Battle of Franklin, Bate’s Division was ordered to Murfreesboro to co-operate with General Nathan B. Forrest, to destroy bridges and communications. In the fighting around Murfreesboro, the Division suffered 87 casualties on December 4, and 313 on December 6.

It rejoined the main army in time for the Battle of Nashville December 15-16. At Nashville the 2nd, 10th, 15th, 20th, 30th and 37th Tennessee Regiments, forming one unit, were stationed in the vicinity of Shy’s Hill in the Granny White Pike section. General Bate reported that his division was virtually annihilated in this battle, and that from the units named, only 65 escaped, and these not as a command, but as individuals. After reassembling the remnants of the division, Bate reported they crossed the Tennessee River December 25, 1864 on the retreat into Mississippi.

There now follows a curious note. Federal reports of the engagement at Egypt Station, Mississippi, on December 28, 1864, state that among the prisoners taken in that fight, there were 253 men, former Federal soldiers, prisoners of war at Andersonville, Georgia, who had enlisted in the 10th Tennessee Infantry Regiment in order to get out of prison. The question was raised as to whether they should be treated as prisoners of war, or traitors to the Union. There is no mention in Confederate records of any men from the 10th Tennessee being engaged in that fight, and in any event, 253 men would have been nearly four times the total from the six Tennessee Regiments whom General Bate reported escaped from the Battle of Nashville.

What was left of Bate’s Division went with the Army of Tennessee to join General Joseph E. Johnston in North Carolina in time to participate in the final battle at Bentonville, North Carolina March 31, 1865. Just after Bentonville, Tyler’s Brigade was shown as composed of the 4th Georgia Sharpshooters Battalion, 37th Georgia Infantry Regiment, 2nd/20th/30th/37th, and l0th/l5th Tennessee Infantry Regiments, with the l0th/15th commanded by Lieutenant Patrick Lavin. On April 9, 1865 the Fourth Consolidated Tennessee Infantry Regiment, commanded by Colonel Anderson Searcy, composed of the 2nd, 3rd Volunteers, 10th, 15th, 18th, 20th, 26th, 30th, 32nd, 37th, and 45th Regiments, and the 23rd Tennessee Infantry Battalion formed one regiment in Brigadier General Joseph B. Palmer’s Brigade of Major General Cheatham’s Division which was paroled at Greensboro, North Carolina May 1, 1865.

Known as the “Bloody Tinth”, it was one of only two Irish Catholic regiments in the Confederate Army, 104 of the 170 original men were Irish-born.

“They were engaged by five to one when charged on with pure steel, But Erin’s sons did loudly cry “We’ll die before we’ll kneel!”